FESTIVALS AND TRADITIONS IN MEXICO SINALOA 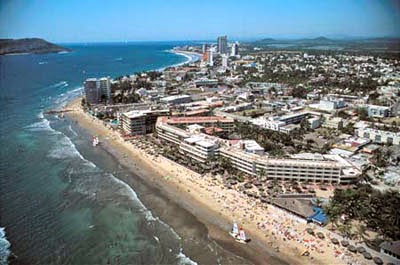 The daily life of Sinaloa people always find a reason to get their particular way of being friendly and sincere, who has distinguished him to the rest of the Mexicans, because it is open, because it is direct and mainly because the singular joy that projects in their festivals has been
increasingly entrenched, generation after generation.

Speaking of the state of Sinaloa, is to speak of a land rich and attractive and rich in natural resources. Costas, valleys and mountains make our potential, allowing a range of activities in which the Sinaloa deals daily.

Being in Sinaloa is to enjoy its beautiful beaches, which are found along its 650 km of coastline. You enjoy the wealth that early colonial Spanish settlers who lived and left us at the edge of the eleven rivers that bathe the fertile soil of our territory.

Visit the colonial vestiges of El Fuerte, Cosalá, Concordia, Copala Rosario and lets go back to the mining era splendor lived state sixteenth to the nineteenth century, a period in which the Jesuit and Franciscan missionaries occupied an important role in shaping our cultural heritage.

Say Mazatlan Sinaloa is talking about, the main tourist center of northwestern Mexico, a place having beautiful sandy beaches and unforgettable sunsets framing the traditional emblem of the three islands, from the vast hotel infrastructure that offers more than 8000 quarts of all categories and types. Place where the lighthouse Cerro Creston, considered the second in the world for its natural height and silent witness the progress and transformation of its harbor found; in the golden area of ​​hustle and hospitality domestic and foreign visitors stay.

The floor of Sinaloa is inhabited by generous people by the change brings progress, able to preserve the charm and flavor of their traditions, lives and relives the festivities since ancient times were held by indigenous groups and early settlers in their eagerness to mix cultures. Thus he also enjoys the native dances of the people may or right, move through the game "ULAMA" an imaginary way to pre-Hispanic times when practicing ball game that surprised the Spaniards who arrived to our lands in the sixteenth century.

Because the taste of their hospitality; his daily life, the beauty of its coastline, valleys and mountains and its people are smiling grounds offer visitors.

The drum is to this day, more rooted music, in which, for their performances usually about 32 instruments, particularly wind and percussion are played so naming him for the outstanding presence of this instrument, the interpretation of the most representative of Sinaloa, such as folk tunes: "the Sinaloa", "the Lost Boy" the Bull "," El Corrido de Sinaloa "," El Coyote "," Milkweed "," La India Bonita "and many others showing the feeling and the soul of the people of this beautiful region.

Throughout the year, the municipalities of the state of Sinaloa, held festivals and cultural events are held in honor of the patron saints of the place, or are being, celebrating the harvest of agricultural products that are grown with so much hope and work, or the sea or inland waters have given generously tons of shrimp and marine species that are consumed in the country and abroad.

The major traditional festivals celebrated in Sinaloa January to December are:

On 20 January at Concordia, a marathon to celebrate the anniversary of its founding.

On day 2, Candlemas Day is celebrated in Mazatlan and Quilá, and in the town of Mazatlan is performed in this month's Carnival Mazatlan, being the longest established in the state, and also held carnival celebrations city ​​of Guamúchil and Topolobampo.

In Concordia celebrated the traditional Spring Festival, in the town of Conception, with dancing, music and fireworks. During Holy Week celebrations are held in the cities of Culiacan, Badiraguato, San Ignacio, Mazatlan and Rosario are also performed; the latter two a theatrical interpretation of the Passion of Christ is made.

The first day is the feast of the Villa de San Felipe y Santiago de Sinaloa, held in the municipality of Sinaloa, celebrating with dance, music and fireworks. On day 3, we celebrate the day of the Holy Cross, Badiraguato. 1st to 3rd, Wheat Fair held in Angostura, Garbanzo and the last days of the month, in the village of El Ebano town of Angostura. From 16 to 24, the festivities are celebrated beach in Cabras and beaches in Esquinapa Teacapán.

The first day is the day of the Navy, so the ports of Topolobampo, Altata, La Reforma and Mazatlan was held celebrations for seafarers and fishermen, with lively traditional dances and rides, listening during day drum music. It is also celebrated in Teacapán.

Cotton Fair in Icesave, is celebrated in the first week of the month, agricultural exhibitions, fairs and rides. Fair Safflower is another important celebration in June, held in Angostura, from 14 to 16; interesting to note that in all the festivities held in this town "ULAMA" is played as an additional show. The 24th day is celebrated the popular San Juan Bautista in Mochicahui, where contingents arrive at the Mayo tribe to dance their traditional dances. It is also celebrated in Cosalá Sinaloa and other regions.

The last day of this month is celebrated in Choix the patron saint of the place, San Ignacio de Loyola.

Variable date this month is holding Maratóica Fair La Villa de Ahome, in the town of the same name.

As in all Mexico, on 15 and 16 September the Independence of our country fairs and fireworks is celebrated. Peach Fair is held from 14 to 16 in Surutato, Badiraguato with traditional dances and verbena Village

The 28th in a large procession goes Choix representations of Moors, dancing accompanying the image of San Miguel, until you reach the church of Baca, neighboring village where other ceremonies are performed.

The 29 parties are made in honor of St. Michael the Archangel, as well as the founding of the city of Culiacan, capital of Sinaloa.

1st to October 3rd is the feast of the miners in the town of Panuco, Concordia.

The fourth day is celebrated at St. Francis of Assisi, in the city of Navolato Esquinapa and with dances. This month is the festival of the Virgin of El Rosario in Icesave and El Rosario.

From 15 to 23 takes place in The Fort, the Craft Fair of the municipality, with dancing and art and cultural exhibitions. In the municipality of Culiacán, takes place from 14 to 30 November, the Regional Livestock Exposition, and is also celebrated statewide on the 20th Anniversary of the Mexican Revolution.

The 8th is celebrated the Immaculate Conception in Port of Mazatlan, with music, dancing and procession. Day 12 in Culiacan, the festival is held in honor of the Virgin of Guadalupe in the temple of La Lomita, so in various parts of the state and in Guamúchil, Los Mochis and Elota.

Popular posts from this blog

When Chiapas mentioned in terms of tourism and possible tours to take in this state of the republic, is surely think in the first instance, in ecotourism or excursions, cultural or anthropological tourism, the fascinating ethnic groups

San Juan del Río, Querétaro is an important industrial center with a good infraestuctura tourist services with the warm atmosphere of the Mexican province. Besides its colonial architecture,
San Juan del Rio has the only place of its kind, "The Museum of Death", whose purpose is to present death as a cultural phenomenon in all its intensity, mystery and symbolism. It is