ESSENTIAL PLACES TO VISIT IN ROME...!!! 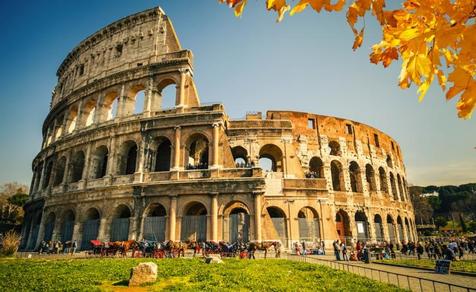 Rome, the city that dominated the world and that is full of corners with great history and beauty, being able to say that it is a great open-air museum. Its churches, monuments, squares and fountains together with great gastronomy make it one of the most fascinating and visited cities in the world. There are many essential places to visit in Rome, so take note and it's your turn to plan your next trip...


They say that it is the most beautiful fountain in the world and although we will not confirm or deny, what we do know is that one of the essential places to visit in Rome. Despite the fact that it is usually always overflowing with tourists, if you go first thing in the morning or late at night, you will be able to take good photos and enjoy it more calmly, although we must also consider that seeing it surrounded by people is also part of its attractive. By the way, don't forget to toss a coin if you want to return to Rome. A good option to enjoy Rome at night is to book this tour with a guide in Spanish that goes through the buildings and squares, such as La Fontana di Trevi, best lit in the city.


Considering that it could host up to 300,000 fans to see up to 12 cars trying to achieve victory, you can imagine the greatness of the place, right? Right now there are few ruins that remember what it was, although we are sure that with a little imagination you will be able to recreate its history seeing the enormous esplanade that can be seen today.

The Colosseum in Rome is the most spectacular and well-known monument in the city and one of the most visited in the world. To see and enter this incredible place is to go back 2000 years, to one of the maximum splendor of the Roman Empire. It used to serve as a distraction to the people of Rome, it was formerly called the Flavian Amphitheater and all kinds of gladiator fights were carried out, executions ... and today it is one of the most visited tourist attractions and as it could not be otherwise, you cannot lose yourself in Rome.

It is one of the most beautiful squares and one of the most essential places to visit in Rome. In this great square its three baroque fountains stand out: Fontana dei Quattro Fiumi, Fontana del Moro and Fontana del Nettuno. Always in our opinion, the source of the 4 rivers is the most spectacular representing the 4 most famous rivers of that time: the Danube, the Nile, the Ganges and the Río de la Plata.

The Pantheon of Agrippa is one of the best things to see and do in Rome. It is also the best preserved building in the Roman Empire, with an impressive dome that has remained unchanged for almost 2000 years, in which, at the highest part, there is a circular window that illuminates the entire building with natural light. Inside you can find Rafael's grave and a vision that we assure you, is totally addictive. Prepare to return several times during your trip as it is one of the essential places to see in Rome.

It is next to the Roman Colosseum, the place that will take you the most to ancient Rome, once the center of social life. In the Forum there are many buildings and corners that are worth visiting with a guided tour, if you do not want to miss much of its history and curiosities. To highlight the Via Sacra, the Arch of Titus and that of Severus Seventh, the Basilica of Maxentius and Constantine, the Temple of Antoninus and Faustina, the Temple of Castor and Pollux ... and we stopped as we would continue for months and it is because if not You have noticed, this is one of our favorite places in Rome. To have good views and a good photo of the Roman Forum we recommend you go to the Palatine and the Plaza del Campidoglio, from where we assure you, you have unique perspectives.

know that there are very few things that we put in this article but this is the first part so the second part is waiting to know what else to see in Rome ...

Popular posts from this blog

When Chiapas mentioned in terms of tourism and possible tours to take in this state of the republic, is surely think in the first instance, in ecotourism or excursions, cultural or anthropological tourism, the fascinating ethnic groups

FESTIVALS AND TRADITIONS IN MEXICO SINALOA

The daily life of Sinaloa people always find a reason to get their particular way of being friendly and sincere, who has distinguished him to the rest of the Mexicans, because it is open, because it is direct and mainly because the singular joy that projects in their festivals has been

PLACES TO VISIT IN PUEBLA TEHUACAN

The city of Tehuacan is famous for its springs, they have transcended as a healthy way to the region to currently marketed mineral water drinks because big names such as water means health are attributed healing properties to the human body .

Today the world of beverages made with mineral water has